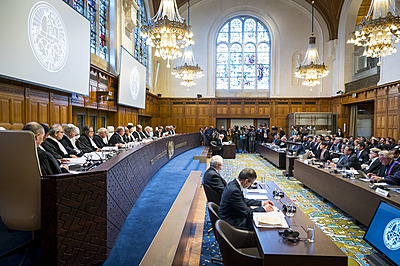 In its Judgment, which is final, without appeal and binding on the Parties, the Court  found that it has jurisdiction, on the basis of Article XXI, paragraph 2, of the Treaty of Amity, Economic Relations, and Consular Rights of 1955, to entertain the Application filed by the Islamic Republic of Iran on 16 July 2018, and that the said Application is admissible.

The Court therefore rejected the preliminary objections to its jurisdiction raised by the United States of America.

On 16 July 2018, the Islamic Republic of Iran filed an Application instituting proceedings against the United States of America with regard to a dispute concerning alleged violations of the Treaty of Amity, Economic Relations, and Consular Rights of 1955, which was signed by the two States in Tehran on 15 August 1955 and entered into force on 16 June 1957

Iran stated that its Application related to the decision of the United States of 8 May 2018 “to re-impose in full effect and enforce” a series of sanctions and restrictive measures targeting, directly or indirectly, Iran and Iranian companies and/or nationals, which the United States had previously decided to lift in connection with the Joint Comprehensive Plan of Action (an agreement on the nuclear programme of Iran reached on 14 July 2015 by Iran, the five permanent members of the Security Council, plus Germany and the European Union).

The Applicant claimed that, through the “8 May sanctions” and further sanctions that had been announced, the United States had violated and continued to violate multiple provisions of the 1955 Treaty.

Accordingly, Iran requested the Court to adjudge, order and declare that the United States has breached its obligations under the Treaty of Amity, that it must put an end to such breaches and that it must compensate Iran for the harm caused. As basis for the jurisdiction of the Court, the Applicant invoked Article XXI, paragraph 2, of the 1955 Treaty.

On 16 July 2018, Iran also filed a Request for the indication of provisional measures. On 3 October 2018, the Court delivered its Order on this request.